Skip to content
Home »Humour»There is a new Tomb Raider on the way. 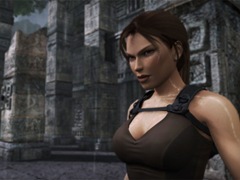 And it will be called Tomb Raider: Underworld.  Due in November 2008.

Back in 1998, Tom Fairman suggested Politically Correct Raider.  Seems a shame that Eidos never took it up.

Weapons: Lara has several weapons to protect her along the path to moral righteousness:
1. Mace – best used on rapists
2. Pen – perhaps the most dangerous weapon when used intelligently
3. Internet Account – Lara can get assistance from news group users, Lara also gets flamed from time to time
4. Acoustic Guitar
5. Voting Booth
6. Picket sign
7. Red paint – Used on women coming out of fur coat stores

Soundtrack: The background music includes many inspirational songs including the following:
1. Kumbaya
2. Give Peace A Chance
3. Send In The Clowns
4. If I Could Talk To The Animals
5. <insert Indigo Girls track here>
6. Let Love Rule